The mission of the National Law Enforcement Officers Memorial Fund is to generate increased public support for the law enforcement profession by permanently recording and appropriately commemorating the service and sacrifice of law enforcement officers and to provide information that will help promote law enforcement safety.

The Officer Down Memorial Page

The Officer Down Memorial Page, Incorporated (ODMP) is a non-profit organization dedicated to honoring America's fallen law enforcement heroes. More than 20,000 officers have made the ultimate sacrifice in the United States and it is with great honor that the ODMP pays a lasting tribute to each of these officers by preserving their memories within its pages. All who visit the ODMP will be deeply moved by the countless stories of selfless courage and heroism exhibited by officers who lost their lives while serving and protecting the citizens of this great nation.

Concerns of Police Survivors, Incorporated provides resources to assist in the rebuilding of the lives of surviving families and affected co-workers of law enforcement officers killed in the line of duty as determined by Federal criteria. Furthermore, C. O. P. S. provides training to law enforcement agencies on survivor victimization issues and educates the public of the need to support the law enforcement profession and its survivors. 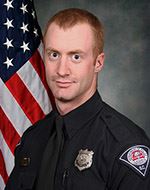 Officer Sorrow was shot and killed during an arrest attempt and foot pursuit of a wanted suspect on Joe Lewis Street. During the pursuit, Officer Sorrow ran around a shed where the suspect was waiting in ambush. The suspect shot Officer Sorrow in the face with a .22 pistol and executed him with 4 shots in the back of the head as he lay unconscious on the ground. The suspect was convicted of murder and sentenced to life in prison.

Officer Sorrow is survived by his wife and son, who was 5 months old at the time of his murder.

Officer Chasteen was shot while questioning a subject regarding an earlier shooting near Booker's Alley in Greenline. The suspect, known by Officer Chasteen, was standing on a corner with a pistol in his right hand. The officers drew their weapons and approached the suspect.

Officer Chasteen, who was nearest Brooks, said, "Give me the gun, big guy." Brooks raised his left hand and wiped the sweat from his face, and at the same time he raised the pistol in his right hand and started shooting Officer Chasteen in the chest. The suspect was wounded and fled.

Officer Hunt was killed in a shoot-out with 5 bandits in the 700 block of Buncombe Street at the Triangle Service Station. Officer Hunt (in uniform) accompanied 2 detectives to investigate 2 suspicious subjects who were in a taxi (there had been armed robberies in the area involving hijacked taxis). As the officers approached the taxi, the subjects began firing. As the officers gained control of the subjects, 3 accomplices drove up in another vehicle and fired on the officers with a full automatic weapon. One subject approached Officer Hunt and shot him twice with a pistol, killing him instantly. The remaining detectives were out of ammunition and were unable to return fire as the 5 subjects escaped.

4 of the 5 suspects were later captured, but only 1 shooter was convicted and given a life sentence.

The original incident began as officers were investigating a suspicious vehicle at the intersection of Augusta Street and Cline Alley. Sergeant Cox grabbed one suspect as he attempted to dispose of some whiskey. "As I seized his collar, he threw his hand to his hip. I thought he was reaching for a bottle of whiskey. He flashed his gun in my face instead and I pushed him backward with the barrel of the riot gun which I held. As I pumped the gun to get a cartridge in the chamber, he fired point blank. The bullet burned like a coal in my right side. I then fired at him as he dived around the corner of a nearby store. They say I hit him, a buck shot having split his chin and another his nose. If it hadn't been for my gun he would have shot me through the head."

While raiding a gambling house in "Bucknertown," both detectives were shot and killed by a suspect who was playing cards at the time of the raid. Detective Kitchens was shot twice after entering the house. Detective Blair was shot in the heart while pursuing the suspect on foot. The suspect escaped and later shot 2 officers in Virginia, killing 1, and was captured in Ohio. The suspect was extradited and executed in Virginia.

The suspect was an escaped convict from a Greenville chain gang on a crime spree. The suspect escaped and was captured in Augusta, Georgia after killing a railroad conductor. He was taken from the jail and lynched by a mob 2 days later.